The Battle of Vimy Ridge, 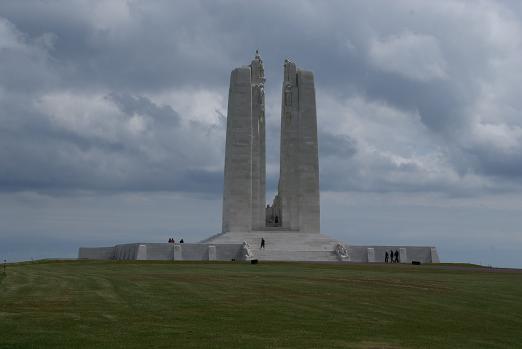 Many historians and writers consider the Canadian victory at Vimy a defining moment for Canada, when the country emerged from under the shadow of Britain and felt capable of greatness. Canadian troops also earned a reputation as formidable, effective troops because of the stunning success. But it was a victory at a terrible cost, with more than 10,000 killed and wounded.

The Canadian Corps was ordered to seize Vimy Ridge in April 1917. Situated in northern France, the heavily-fortified seven-kilometre ridge held a commanding view over the Allied lines. The Canadians would be assaulting over an open graveyard since previous French attacks had failed with over 100,000 casualties.

To capture this difficult position, the Canadians would carefully plan and rehearse their attack. To provide greater flexibility and firepower in battle, the infantry were given specialist roles as machine-gunners, rifle-men and grenade-throwers. These same soldiers underwent weeks of training behind the lines using models to represent the battlefield, and new maps crafted from aerial photographs to guide their way. To bring men forward safely for the assault, engineers dug deep tunnels from the rear to the front. Despite this training and preparation, the key to victory would be a devastating artillery barrage that would not only isolate enemy trenches, but provide a moving wall of high explosives and shrapnel to force the Germans to stay in their deep dugouts and away from their machine-guns. "Chaps, you shall go over exactly like a railroad train, on time, or you shall be annihilated," warned Canadian Corps commander Sir Julian Byng.

In the week leading up to the battle, Canadian and British artillery pounded the enemy positions on the ridge, killing and tormenting defenders. New artillery tactics allowed the gunners to first target, then destroy enemy positions. A nearly limitless supply of artillery shells and the new 106 fuse, which allowed shells to explode on contact, as opposed to burying themselves in ground, facilitated the destruction of hardened defences and barbed wire. The Canadian infantry would be well supported when it went into battle with over 1,000 artillery pieces laying down withering, supportive fire.

Attacking together for the first time, the four Canadian divisions stormed the ridge at 5:30am on 9 April 1917. More than 15,000 Canadian infantry overran the Germans all along the front. Incredible bravery and discipline allowed the infantry to continue moving forward under heavy fire, even when their officers were killed.  There were countless acts of sacrifice, as Canadians single-handedly charged machine-gun nests or forced the surrender of Germans in protective dugouts. Hill 145, the highest and most important feature of the Ridge, and where the Vimy Monument now stands, was captured in a frontal bayonet charge against machine-gun positions. Three more days of costly battle delivered final victory. The Canadian operation was an important success, even if the larger British and French offensive, of which it had been a part, had failed. But it was victory at a heavy cost: 3,598 Canadians were killed and another 7,000 wounded.

The capture of Vimy was more than just an important battlefield victory. For the first time all four Canadian divisions attacked together: men from all regions of Canada were present at the battle. Brigadier-General A.E. Ross declared after the war, "in those few minutes I witnessed the birth of a nation."

Vimy became a symbol for the sacrifice of the young Dominion. In 1922, the French government ceded to Canada in perpetuity Vimy Ridge, and the land surrounding it. The gleaming white marble and haunting sculptures of the Vimy Memorial, unveiled in 1936, stand as a terrible and poignant reminder of the more than sixty thousand Canadians who died serving their country during the First World War.

It is estimated that 55,000 Canadian Orangemen enlisted in the Canadian Armed Forces and upwards of 8,000 paid the supreme sacrifice during the First World War. 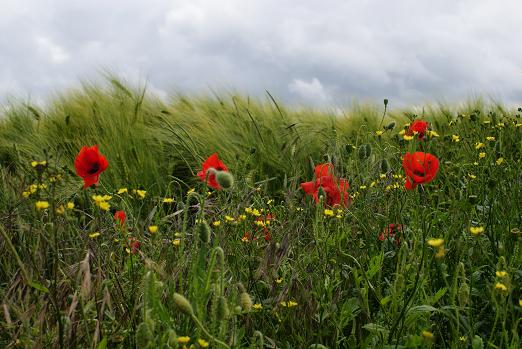 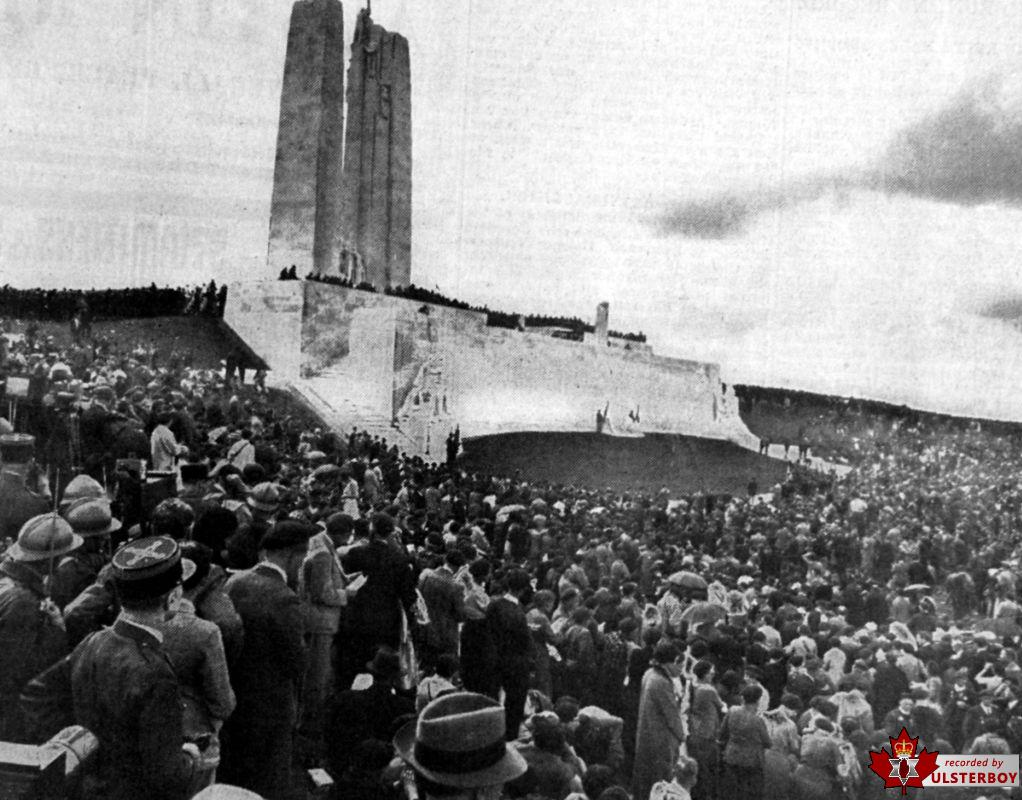 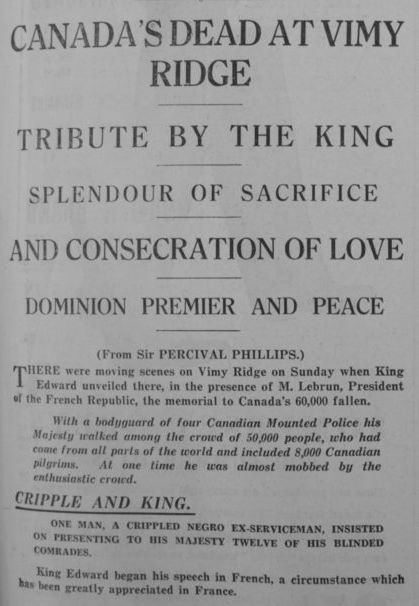 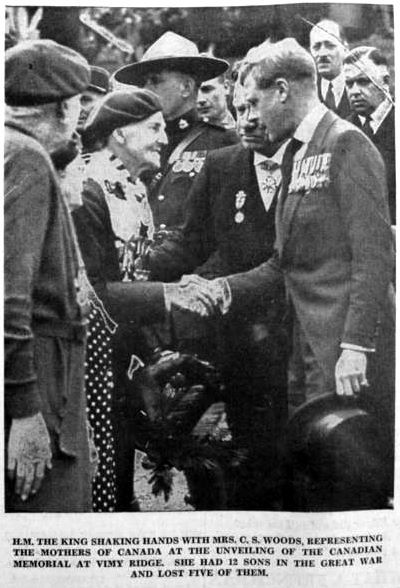 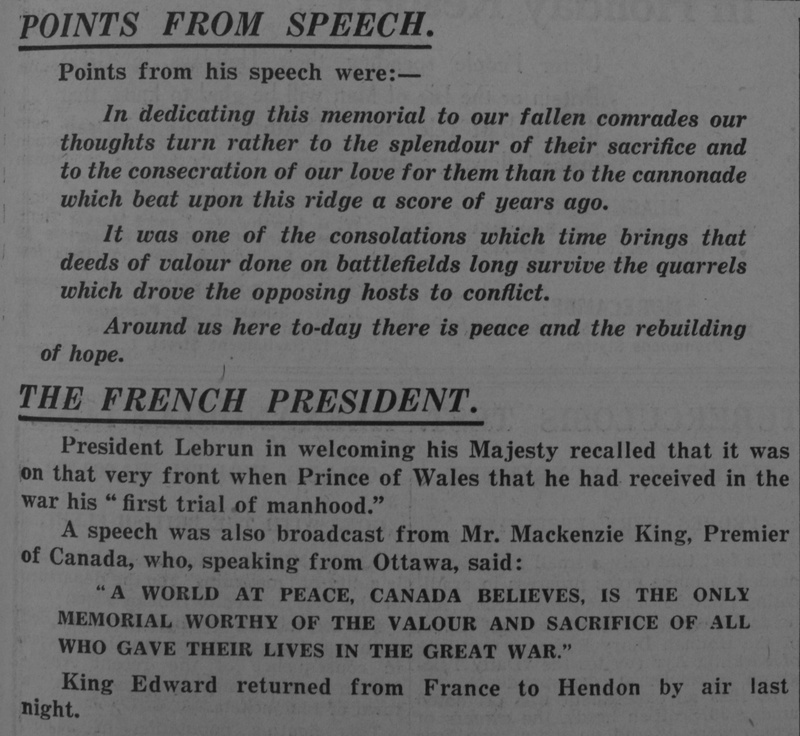 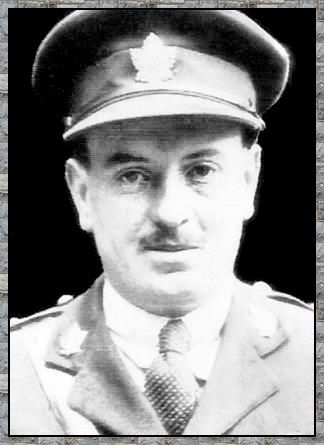 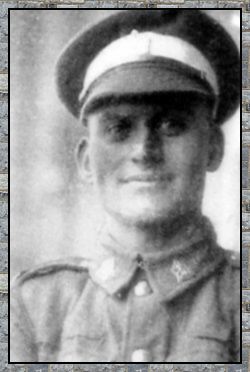