More
History of the Poppy 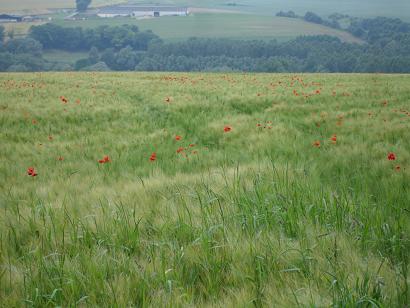 The first official Legion Poppy Day was held in Britain on 11 November 1921, inspired by the poem In Flanders' Fields written by John McCrae. Since then the Poppy Appeal has been a key annual event in the nation's calendar.

How the Poppy Appeal Began
Some of the bloodiest fighting of World War One took place in the Flanders and Picardy regions of Belgium and Northern France. The poppy was the only thing which grew in the aftermath of the complete devastation. McCrae, a doctor serving there with the Canadian Armed Forces, deeply inspired and moved by what he saw, wrote these verses:
On the eleventh hour of the eleventh day of the eleventh month in 1918, the First World War ended. Civilians wanted to remember the people who had given their lives for peace and freedom. An American War Secretary, Moina Michael, inspired by John McCrae's poem, began selling poppies to friends to raise money for the ex-Service community. And so the tradition began.
The Poppy factory
In 1922, Major George Howson, a young infantry officer, formed the Disabled Society, to help disabled ex-Service men and women from the First World War. Howson suggested to the Legion that members of the Disabled Society could make poppies and the Poppy Factory was subsequently founded in Richmond in 1922. The original poppy was designed so that workers with a disability could easily assemble it and this principle remains today. Visit their website www.poppyfactory.org for more information.
Why was the Poppy chosen as the symbol of remembrance for Canada's war dead?
The poppy, an international symbol for those who died in war, also had international origins.

A writer first made the connection between the poppy and battlefield deaths during the Napoleonic wars of the early 19th century, remarking that fields that were barren before battle exploded with the blood-red flowers after the fighting ended.

Prior to the First World War few poppies grew in Flanders. During the tremendous bombardments of that war the chalk soils became rich in lime from rubble, allowing 'popaver rhoeas' to thrive. When the war ended the lime was quickly absorbed, and the poppy began to disappear again.

Lieut-Col. John McCrae, the Canadian doctor who wrote the poem IN FLANDERS FIELDS, made the same connection 100 years later, during the First World War, and the scarlet poppy quickly became the symbol for soldiers who died in battle.
Three years later an American, Moina Michael, was working in a New York City YMCA canteen when she started wearing a poppy in memory of the millions who died on the battlefield. During a 1920 visit to the United States a French woman, Madame Guerin, learned of the custom. On her return to France she decided to use handmade poppies to raise money for the destitute children in war-torn areas of the country. In November 1921, the first poppies were distributed in Canada.

Thanks to the millions of Canadians who wear flowers each November, the little red plant has never died. And neither have Canadian's memories for 116,031 of their countrymen who died in battle.