Her Majesty The Queen was born in London on April 21, 1926 and later christened Elizabeth Alexandra Mary. She was the first child of The Duke and Duchess of York, who later became King George VI and Queen Elizabeth. The Princess Elizabeth, along with her sister the Princess Margaret , had her early education at home and, after her father succeeded to the Throne in 1936, became heiress presumptive. Shortly after her eighteenth birthday, she was appointed Counsellor of State during the King's absence and, for the first time, exercised certain functions of the Crown.

The couple first toured Canada as Their Royal Highnesses The Princess Elizabeth and The Duke of Edinburgh in the autumn of 1951, travelling from coast to coast. Thus began their life long relationship of affection for and service to our country.

Following the untimely death of her father King George VI on February 6, 1952, The Princess Elizabeth acceded to the Throne as Her Majesty Queen Elizabeth II and was separately proclaimed Queen of Canada. The Coronation took place sixteen months later on June 2, 1953.

"As Queen of Canada, you have borne witness to our national growth and, indeed, have been present for many historic moments in the life of our country. I have had the honour to be in your presence on numerous occasions, and have always admired your commitment to Canada and your very genuine affection for Canadians."

On numerous fronts, The Queen's relationship with Canada and Canadians continues to grow stronger with each passing year. She has given Her patronage to many Canadian organizations and retains a special relationship with the Canadian Forces. Further, as our Head of State, She is the fount of our Canadian Honours System that recognizes significant achievement and service of Canadians in numerous fields of human endeavour, such as the Order of Canada, Order of Military Merit, as well as decorations for bravery, meritorious service and for gallantry. 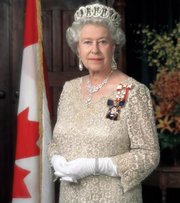 God Save the Queen

O Lord our God arise, Scatter her enemies And make them fall; Confound their politics, Frustrate their papish tricks, On Thee our hopes we fix, Oh, save us all!

Thy choicest gifts in store On her be pleased to pour; Long may she reign; May she defend our laws, And ever give us cause To sing with heart and voice, God save the Queen!

Our loved Dominion Bless With peace and happiness From shore to shore And let our Empire be Loyal, united, free, True to herself and thee For evermore.