I've set-up this update page to keep those informed who are interested in our clubs progress to becoming fully chartered, our goal is to have this instituted for August 2012.

Our next regular meeting will take place on Sunday March 3rd 2013 at Campbell's Cross Hall at 14:00.

On March 2nd, our Club and membership are invited to take part in the Ulster Covenant Signing which will be held at the Orange Hall between 18:00 - 20:00 all members are asked to wear their full regalia if taking part.

For those who are unable to attend the Orange Hall event, we can have our own Signing before or after our club meeting the following day.

Our first official club meeting will take place in September, all brethren will be notified in due course as we're waiting on the return of our brothers who are currently still visiting the united kingdom.

Well that's it folks as of the 10/08/12 we're an official branch of the Apprentice Boys of Derry.

On Friday the 10th a bus will depart Bro J McCormick's place and pick up a fellow bro. from the city airport and head directly to the Memorial Hall where 2 of our members will be initiated into the association, followed by our charter installation, after which our officers will be installed, then our bannerette will be dedicated to the club by the ABOD Chaplin, then we will make our presentations to the General Committee and Campsie Parent Club on behalf of our new club and newly installed officers and membership. The Londonderry Sentinel will also be on hand for a photograph and interview for an article in the local paper, once this is all complete we'll head off to our hotel for check-in.

Later that evening we'll head back to the memorial hall for a night of entertainment and later on we will be taking part in the touching of the gates ceremony around the Walls of Derry and at midnight we will be invited to fire one of the the four canon fires on the night.

The next morning (sat 11th 9:15am) we will be taking part in the morning parade around Derry's Walls, followed by a Remembrance Wreath Laying Ceremony, once the ceremony is complete we'll parade to St. Columb's Cathedral for a Service of Thanksgiving.

For the main parade (12:30pm) we are invited to parade along with the General Committee at the head of the Procession.

After the main parade we'll be heading to the Ballymena Show-grounds with the ABOD Faith Defenders for a bite to eat and refreshments, later that evening we will be parading from the Belfast Telegraph to Clifton Street Orange Hall where we will disperse after the National Anthem.

Due to time restrictions and so on, only the eight brethren taking part will have their new shirts, the brethren remaining in Canada can receive their shirts, ties and badges at a later date when there's more time available to us.

Thomas McCormick has been the latest edition to the Brampton Campsie Club, Bro. McCormick was installed July 14th 2012. Congratulations.

Also, a good friend and fellow Brother (Bro. David Hume) from Scotland has transfered from the Aberdeen Baker Club to our Brampton Campsie Club.

I'll add another update before our charter installation. 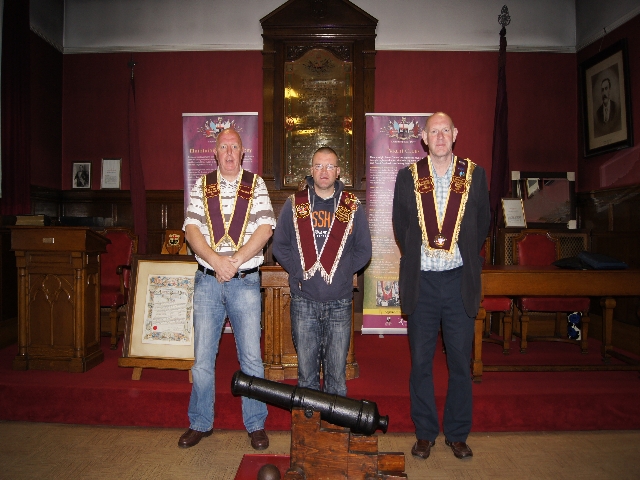 After a productive meeting on March 3rd the club is moving along nicely and things are being put in place for our Charter in August 2012 if anyone is interested in joining the Apprentice Boys of Derry please get in contact.

Out first proper meeting was held on December 18th 2011 at Campbell's Cross Hall, The meeting was a huge success with lots of positive feedback from those in attendance, everyone who attended, are very excited, that we'll finally have our own Campsie Club in the City of Brampton and to open another Apprentice Boys of Derry Branch outside of the United Kingdom is going to be a big achievement.

Bro. John McCormick had the Honour of being in attendence and Marshall while David McMaster joined the Apprentice Boys of Derry and was initiated into the Campsie Parent Club November 17th 2011.

Progress is now being made for us to receive our Club Charter for August 2012, there will be a few meetings throughout the year to help make this happen, if anyone is interested in joining the Brampton Campsie Club please get intouch via this website, at present Bro. Allan has all paperwork and regalia to move the club forward. 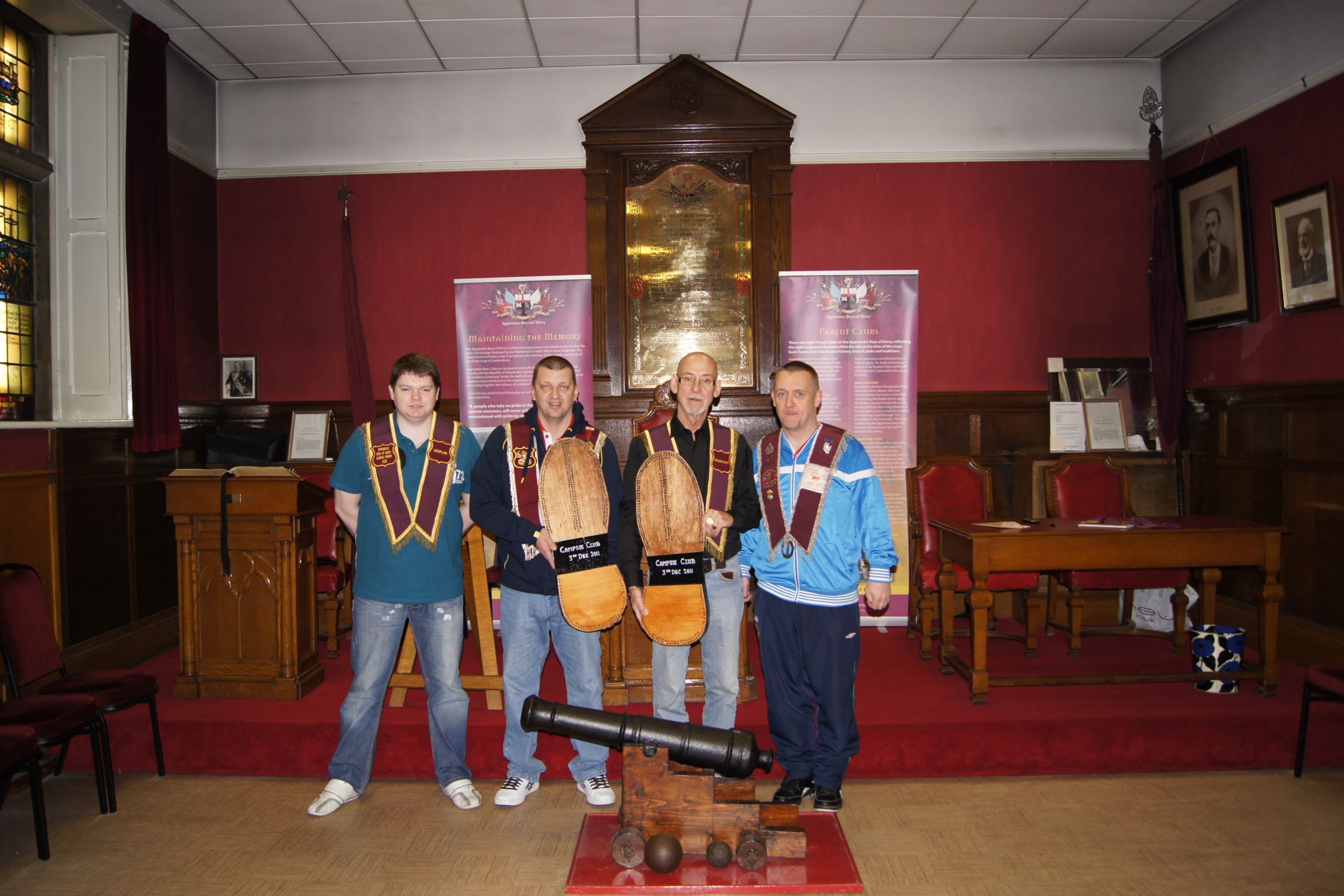 John McCormick and Scott Allan have both joined the Apprentice Boys of Derry and where initiated into the Campsie Parent Club October 28th 2010.

Brothers McCormick and Allan are officially the first two Brampton Campsie men in Canada and will receive their certificates when the club is fully Chartered next August 2011. 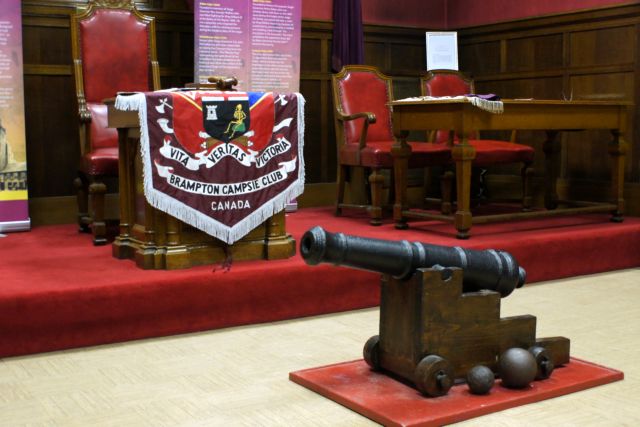 The club has purchased a new bannerette, Scott Allan will have this at our next meeting on November 14th 2010. 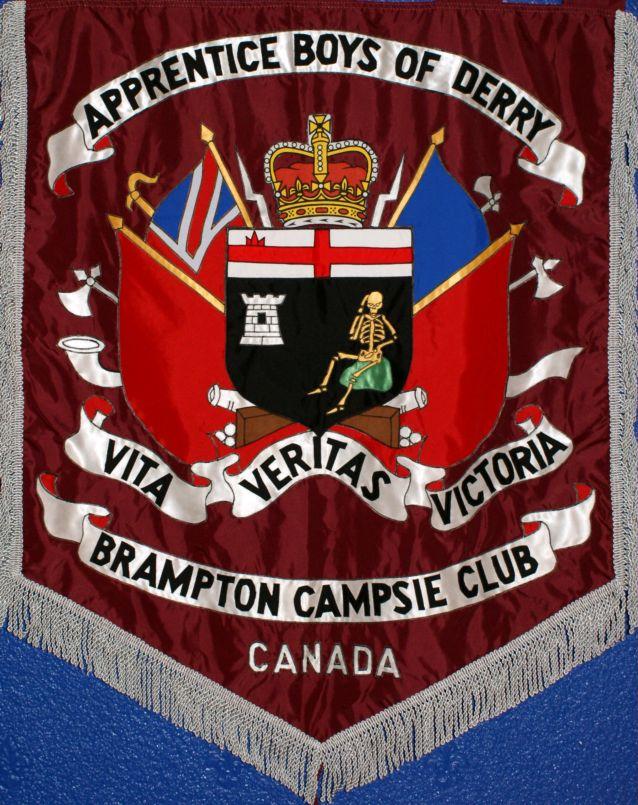 Individual branch club members collarettes have been designed by Alexanders in East Belfast, collarettes are priced at £57.50 each, please note that this price will be going up in January 2011 due to a VAT. increase in the UK.

edited: nov 16th. Brothers McCormick and Allan have both purchased the new collarettes and advise new members to get on the ball and get theirs ordered before the price increase, sorry for the low quality picture it's the best image i had.

Please note: For those members that currenty have collarettes, the Derry crest and the Brampton crest can be ordered on they're own at a cost of £6.50 each. 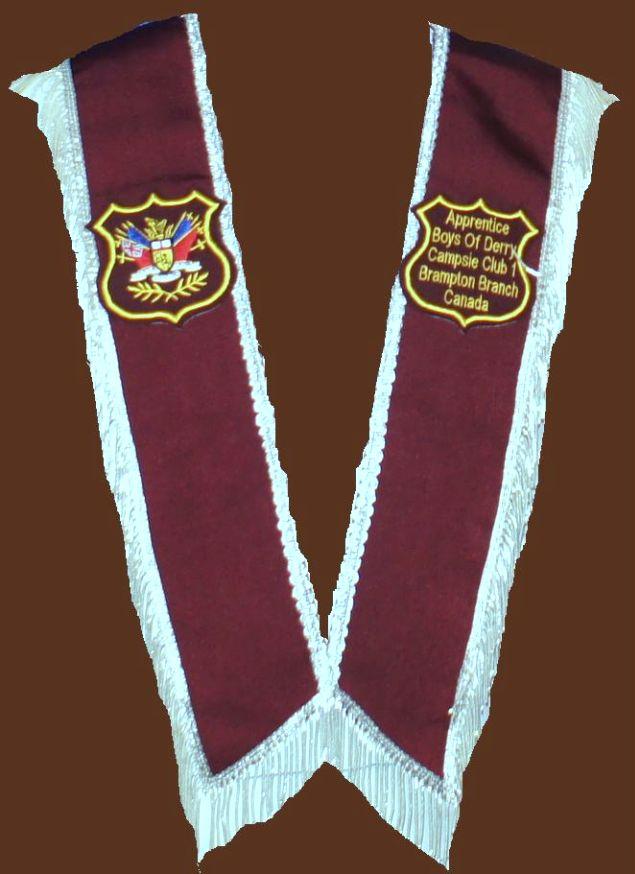 Bro. Johnston while visiting Northren Ireland has purchased the proper regalia for the Officer Bearers once the club is up and going.

While visiting Ulster this July Bro. Johnston will be ordering office collarettes as well as ordering a club bannerette with the apprentice boys of derry crest.

The bannerette once complete will be left with John McCormick for safe keeping until someone can bring it back.